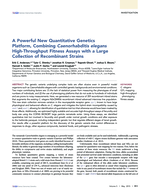 The genetic variants underlying complex traits are often elusive even in powerful model organisms such as Caenorhabditis elegans with controlled genetic backgrounds and environmental conditions. Two major contributing factors are: (1) the lack of statistical power from measuring the phenotypes of small numbers of individuals, and (2) the use of phenotyping platforms that do not scale to hundreds of individuals and are prone to noisy measurements. Here, we generated a new resource of 359 recombinant inbred strains that augments the existing C. elegans N2xCB4856 recombinant inbred advanced intercross line population. This new strain collection removes variation in the neuropeptide receptor gene npr-1, known to have large physiological and behavioral effects on C. elegans and mitigates the hybrid strain incompatibility caused by zeel-1 and peel-1, allowing for identification of quantitative trait loci that otherwise would have been masked by those effects. Additionally, we optimized highly scalable and accurate high-throughput assays of fecundity and body size using the COPAS BIOSORT large particle nematode sorter. Using these assays, we identified quantitative trait loci involved in fecundity and growth under normal growth conditions and after exposure to the herbicide paraquat, including independent genetic loci that regulate different stages of larval growth. Our results offer a powerful platform for the discovery of the genetic variants that control differences in responses to drugs, other aqueous compounds, bacterial foods, and pathogenic stresses

Phenotypes from our high-throughput fitness assays.