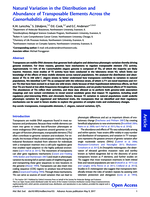 Transposons are mobile DNA elements that generate both adaptive and deleterious phenotypic variation thereby driving genome evolution. For these reasons, genomes have mechanisms to regulate transposable element (TE) activity. Approximately 12-16% of the Caenorhabditis elegans genome is composed of TEs, of which the majority are likely inactive. However, most studies of TE activity have been conducted in the laboratory strain N2, which limits our knowledge of the effects of these mobile elements across natural populations. We analyzed the distribution and abundance of TEs in 208 wild C. elegans strains to better understand how transposons contribute to variation in natural populations. We identified 3,397 TEs as compared to the reference strain, of which 2,771 are novel insertions and 241 are TEs that have been excised in at least one wild strain. Likely because of their hypothesized deleterious effects, we find that TEs are found at low allele frequencies throughout the population, and we predict functional effects of TE insertions. The abundances of TEs reflect their activities, and these data allowed us to perform both genome-wide association (GWA) mappings and rare variant correlations to reveal several candidate genes that impact TE regulation, including small regulatory piwi-interacting RNAs (piRNAs) and chromatin factors. Because TE variation in natural populations could underlie phenotypic variation for organismal and behavioral traits, the transposons that we identified and their regulatory mechanisms can be used in future studies to explore the genomics of complex traits and evolutionary changes.