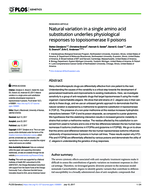 Many chemotherapeutic drugs are differentially effective from one patient to the next. Understanding the causes of this variability is a critical step towards the development of personalized treatments and improvements to existing medications. Here, we investigate sensitivity to a group of anti-neoplastic drugs that target topoisomerase II using the model organism Caenorhabditis elegans. We show that wild strains of C. elegans vary in their sensitivity to these drugs, and we use an unbiased genetic approach to demonstrate that this natural variation is explained by a methionine-to-glutamine substitution in topoisomerase II (TOP-2). The presence of a non-polar methionine at this residue increases hydrophobic interactions between TOP-2 and its poison etoposide, as compared to a polar glutamine. We hypothesize that this stabilizing interaction results in increased genomic instability in strains that contain a methionine residue. The residue affected by this substitution is conserved from yeast to humans and is one of the few differences between the two human topoisomerase II isoforms (methionine in hTOPIIα and glutamine in hTOPIIβ). We go on to show that this amino acid difference between the two human topoisomerase isoforms influences cytotoxicity of topoisomerase II poisons in human cell lines. These results explain why hTOPIIα and hTOPIIβ are differentially affected by various poisons and demonstrate the utility of C. elegans in understanding the genetics of drug responses.